I crossed over the road to head back to the Landmark Hotel; behind me, the bride and groom decided to jump in a black cab. I grabbed the shot as a cyclist rode past and got the type of shot I’ve wanted to capture since starting to photograph weddings: a true blend of wedding photography and street shot. It became my favourite image of the day. 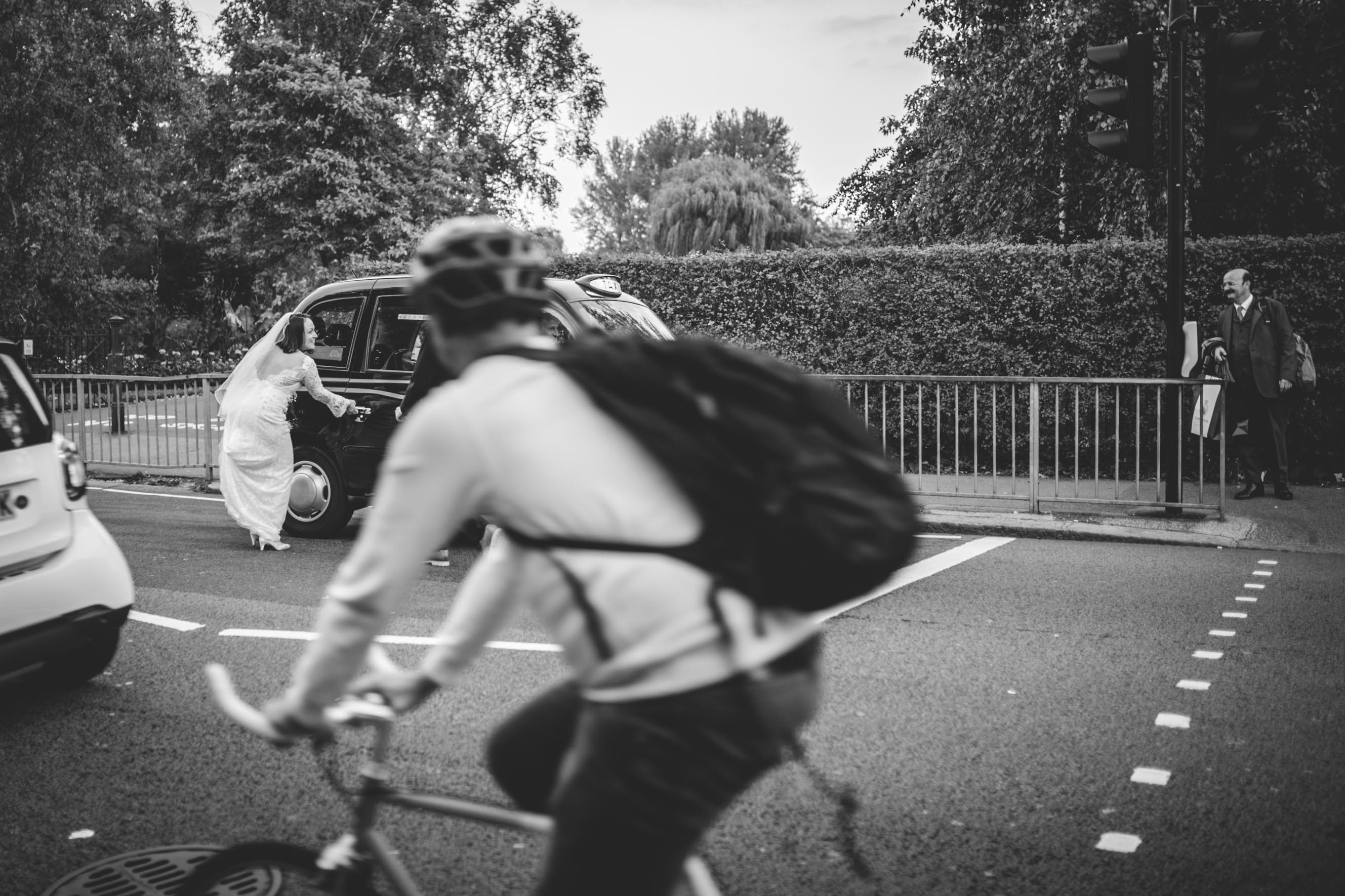 Earlier that morning, I’d travelled down to London Marylebone from Moor St Station in Birmingham. In the Landmark Hotel, I got a few shots of the groom – Barney before I went up to Naomi’s room and took the traditional ‘preparation’ shots.  Then we headed across the road to The Old Marylebone Town Hall where the guests had started to enter.

Having looked at this venue online, I quickly noticed the range of celebrity weddings the prestigious venue has hosted: Sir Paul McCartney, Ringo Starr, Antonio Banderas and Melanie Griffith all have had ceremonies here and I was about to photograph the wedding of Naomi Said and Barney Heywood.

A few months ago I put out an advert on Facebook promoting my ‘pay what you feel’ offer which Naomi and Barney took me up on. I’d never done anything this big before and I knew failure was not an option. I was primed as I’d already photographed some smaller weddings and my experience as a street photographer shooting the streets of various cities was a great education in how to shoot fast and be accurate.

Here I was in front of the couple and their guests at this beautiful venue. I shot the ceremony with two camera bodies; a Canon 5D Mark III with a Sigma Art 35mm prime and a Canon 5D Mark IV with 70-200mm lens. After the ceremony, the party headed outside for more photos and back to the hotel for canapés, drinks and speeches.

I was concerned as Naomi wanted to head to Regent’s Park for some nice portraits but I knew the light would be fading fast after 4.30pm so the three of us jumped in a cab and headed to the park to catch that beautiful golden hour light.

Walking through the park was great, everyone looking and smiling, snapping the couple on their phones and offering their congratulations.

I got some shots in the park that I’m really proud of – the light was fantastic and as the sun started to go down I managed to capture the shot of Naomi getting into the black cab which I’m really proud of. It encapsulates everything I want to be as a documentary wedding photographer because it’s a pure moment which is not set up or staged. I know not every wedding will give me that opportunity but I hope I can go on from here and maybe get just the odd shot like that, once in a while.

And yes, they waited for me to get in the cab too.